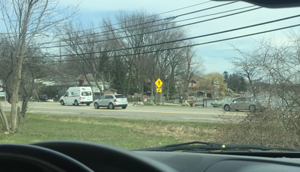 What can I say about surveillance? Well, it’s nothing like the movies, that’s for sure! I have never ordered a pizza delivered to my vehicle, or sat comfortably in the front seat with the windows down enjoying the cool breeze talking to passers by. Unfortunately, the media portrayal of surveillance isn’t very realistic, and really doesn’t even begin to describe what happens in a real surveillance. I’m sure most people have seen a cop show on TV that shows the suspect get in his car and drive away, as the detective turns his headlights on and pulls out immediately behind him to follow. Not to mention, there are two guys in a stationary van watching satellite images, the three operatives reading newspapers on the street, and the helicopter circling the block! If that was what surveillance was really like, just about anyone could do it.

The true art of surveillance is to not only go unnoticed by the subject, but also by the entire neighborhood that you are conducting the surveillance in. That means using a nondescript vehicle (not an extended cargo van retrofitted with recliners), keeping the windows up, and the engine off. It’s kind of hard to go unnoticed if you are sitting in a car with the engine running and sports talk coming through the radio speakers. This means that if it’s 85 degrees outside, it will be well over 100 degrees inside of the vehicle. And in the winter, when it’s 10 degrees outside, it will be about 11 degrees inside of the vehicle. An investigator must be creative when developing ways to regulate body temperature and remain hydrated during the course of the surveillance. Not to mention, taking care of other natural tasks that a body must perform over the course of a day. These concerns coupled with the fact that you could be sitting in the vehicle for eight, twelve, or more hours make surveillance a very exhausting venture.

Of course, sitting in a parked vehicle is only part of surveillance. Once your subject begins moving, the adrenaline skyrockets and the “fun” begins. Staying far enough back to not be noticed, but close enough not lose sight of the subject; timing traffic lights; dealing with other drivers who don’t understand that you are trying to conduct surveillance; and being safe all factor in to making mobile surveillance one of the most difficult things for an investigator to master. As referenced earlier, in most situations the private investigator is working alone with no back up, so there is no one there to pick it up when you get stopped at a light or get stuck behind a school bus. Conducting successful surveillance is a combination of training, experience, hard work, perseverance, and definitely a bit of luck.

Not quite how the TV cops make it look, is it? However, as miserable and difficult as it may sound to the average person, most surveillance investigators wouldn’t want to be doing anything else!